Top
This is the speciality bread from  Bangalore Iyengar’s Bakery  that most of south Indian people would have devoured and cherished, Actually I never had any idea about this bread, as I never ate bread so much.  The maximum I ate bread was only with bread toasted in Iyengar Bakery style with veggies or of course did I forget to tell you my favourite Bread if I ever ate was Khara Bread.  My Kids use to eat them with jams and they would love it.
Many things change in life, when I think now, I never use to buy lot of bakery food as I always disliked my children eating anything which has yeast and Baking soda or powder in it.   Now,  everyday they take only sandwiches to  school, they don’t like anything Indian food in their lunch box, I give them wholemeal bread though and with some vegetables, cheese and lettuces and salad leaves.
Slowly I started to learn baking, I was so scared to use the oven didn’t know how it worked first and then slowly I started home fries, ready made pizza bases etc.,
Now, My love for Baking has become a passion,  no an obsession I think, as my sister was joking the other day maybe it is because it is the blood in you.  Wondering what I am talking about, well, I come from a bakers family, As I was saying earlier Iyengars Bakeries are very famous in Bangalore, all of them come from in & around villages from Hassan district, we have a diety in Bylahally called Lakshmi Janardhana, which I think most of you have must seen in the boards saying LG Iyengar’s Bakery, all of them have a photo of this God, My forefathers and lot of my cousins have bakeries in most of South India. But, now a days most of my cousins are not interested in bakeries even their children are not interested either, most of them have gone into professional courses and have gone far and wide.   But, some of them still are going in the business, Check that link to see more about the God,  Kyatnahalli, is an other village in Hassan district.  Some of my family do come from that village too. The Bramha ratotsavam of this Lord Lakshmi Janardhana takes places every year during the month of January between 12th or 13th.  If you go their you can see all the Bakery owners from all over the place come to attend and nobody likes to miss this opportunity.  This God is a very small diety, but very famous.  They serve a lovely lunch and brunch during ratotsavam and the puliyodarai is just very famous too, served as a prasadam.
Coming back to the Recipe, I thought of getting this only when Harini of Tounge Ticklers, wrote to me about this, she was so interested in this recipe, So around 3 months back I called my cousins Ramprasad & Krishna both have bakeries in Bangalore, to find out about this recipe, They of course told me in their version of making in big bulks and I tried it thrice and flopped each time, their was some problem, but what I learnt from this was patience, my patience the 4th time gave me the best results.  During diwali I baked this bread that was saturday, my friends were here with me, and they gave me a thumbs up sign saying I have done it, and said it was just like the bread they relished in Bangalore, I was so happy, clapped my hands with tears of joy !!, So Harini this recipe is especially for you love, who was behind my mind to bake this bread.
I have updated this post and removed the Original amount which my cousins gave me as it was a bit difficult to work out and this is my Home baking version.
SWEET BREAD/SPECIAL BREAD/ MILK BREAD 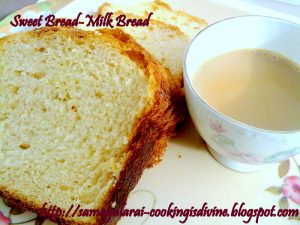 INGREDIENTS
375- 400 grms APF/Maida (around 3 &  1/2 cups)
75 grms Sugar
25 grms Milk powder
2.5 grms salt
37.5 grms Oil
2 tsp / 7 to 8 grms Yeast
1  Cup water
METHOD:
In a bowl take 2 to 3 tbsp of Luke  warm water and add yeast to it with a tsp of sugar, mix it up and allow it to froth up in a warm place. This helps us in confirming that the yeast is still active.
Take flour, milk powder, sugar and salt , mix them all together.Once the yeast froths up add it to the flour mixture and then the oil and mix it well
Then start adding water until it forms  into a soft dough.
Knead for 10-15 minutes with the help of dipping your hand in the flour now &  then.
Keep the dough in a bowl, cover with a clean damp towel or pat a bit of oil to the dough so that it won’t dry and cover the bowl with a cling film and leave it in a warm place until it rises doubled in size.
Once it completely raises in double take it out, give a punch and handle the dough like a flower and knead it softly for an other 5 minutes.Shape the dough and place in greased tin or on a baking tray or in a loaf pan lined with parchment paper or  however you always bake your breads.
Spray a little oil on the cling film and cover it again and leave it in a warm place once again and allow it to raise until doubled in volume, Once it is  raised take the cling film. Bake in an oven, preheated to 230 degrees ( 450 degree Fahrenheit/ Gas mark 8) for 10 minutes, then reduce the temperature to Gas mark 6 and bake for  30-35 minutes.The baked loaf should sound hollow when tapped underneath take the loaf out of the tin and cool on a cooling  rack.

MY NOTES (WHICH IS VERY IMPORTANT ) AND MY VERDICT TOO:

Which I feel is very important as the way my cousins described to me was little bit different one of them said to take the amount of water he told and asked me to put salt, sugar, yeast and oil in it and then add the flour & milk powder to it and make it into a dough, the other didn’t say anything about mixing as he was busy with the customers!!, so I had to write down anything he told me over the phone and did not disturb him during his business hours, well it was fun, So what I did was I quartered the recipe , but the flour wasn’t enough when I  made the dough. Dough becomes so sticky I had tried with 500 gms of flour too.., So I started mixing more flour but did not increase any other ingredients and maintained them as it was, when the dough became stick I kept increasing the flour and stopped until it became less sticky and I could handle the dough easily when I was kneading if it became sticky when kneading I dipped my hand just in dough take it out and start kneading again, that way I was not adding any more flour but I got the job done!! bravo.., then came the raising section and that was the best part, even the weather didn’t help may be people leaving in India might be lucky as it is quite warm up there, mine took 24 hours and I had to wait with  lot of patience and didn’t do anything until it doubled in size, I left in the fridge overnight then took it out in the morning and left it in a warm place Once it raised I punched it, kneaded it again softly the dough will be a bit sticky handle with care and put it back in the loaf tin and left it again for it to raise again and then, I had lot of patience as I had thrown the baked dough thrice, that’s it no more wasting so patience was my key…, job done Lo!! here is my lovely soft sweet bread, you all must give it a try, they were just so soft as the shop bought ones and I couldn’t believe it myself.
So I like to thank Harini, & my cousins who gave me this recipe and I achieved it at last..,
Last but not least because of this bread I web searched and got this web address kaythnahalli where in |I watched this year’s Rathothsavam of Lord Lakshmi Jhanardhana, in a video coverage.