Hi Everybody, Hope you are all doing well, Days have been quite busy!, thank God!, school has reopened and I think life is going to back to normal, (should I say quite mechanical) whatever it is days are going to be different, at least for my kids, they will now be out from their couch!
I thought we will be left with a little bit of summer still, but there is no chance that’s not going to happen, the gloomy weather is already on its way!, trying to tell us in its own way that the winter days are going to come soon.
It’s raining from morning and I was thinking of bringing all my plants Indoors, well, I haven’t told you have I :), During summer I really wanted to enjoy growing somethings in my garden, and I did really enjoyed it, I forgot blogging and thought I will do this first and later on blogging!, and it was such fun!, I will post some of my pics of my plants next time.
When this delightful lady announced this event, or shall I say every time she announced, I really wanted to give it a try, and I would just gape at all those lovely ladies, creating dishes in different shapes, colours, sizes, quantities etc. I wanted to give it a go!, but never really thought about it, My friend had come to visit me and when he left I thought I wanted to make some sweet quickly while I was cooking my traditional menu!, I just had mangoes which were too ripened and that was then I thought of making halwa, so I started of but twisted it a little bit by adding Quinoa making it more healthier. Anyway even though I made this before the deadline, I could never post it at all, and she is too quick for me, I thought of posting it the next day and ask her add me into her event, she already posted her round – up. well, even then thanks valli with your cooking with Microwave rubbing off on me I made this lovely Halwa and everybody enjoyed it!, only my son who ate 3/4th of it said, there was something weird!, I think the quinoa I tried to hide was something different for him!!
well, here goes the recipe….. and thanks to valli making me do something in Microwave very bravely :)) 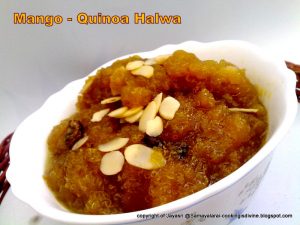 INGREDIENTS:
1 Cup Mango Pulp
1/4 Cup Quinoa
4 tbsp of Milk
3/4 th Cup Sugar
3/4 th Cup water
1/4 tsp Cardamom powder
1/4 Cup Raisins
1/4 Cup Ghee
METHOD:
First of all I took around 4 mangoes, peeled the skin and cut them into pieces and blended them into a puree in my mixie, and it came up to 1 cup.
When I was cooking My MW was in high (800W) all the time.  Then  I cooked Quinoa in the Microwave with 3/4th cup of water, I Microwaved it till 7 for 2 times (I have shown a Photograph of my MW timer so you would know where the 7 is!). 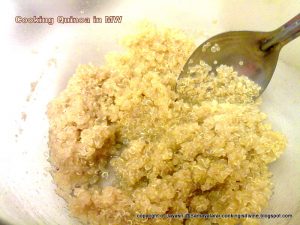 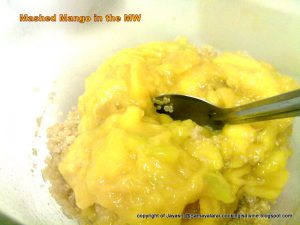 It became mushy and the whole thing was soggy and I added 2 tbsp of Ghee and mixed it well, and put it on 7 timer again and cooked again. 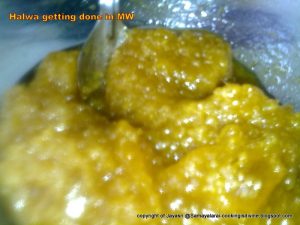 It started becoming thicker and starting to a halwa consistency after one more time on the 7 timer. 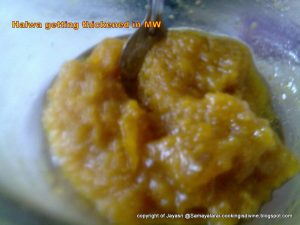 This is my MW timer I just wanted to show where the 7 on my timer was! 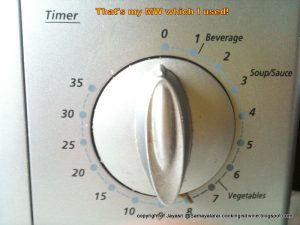 Then I took my MW pyrex bowl poured the left over ghee and raisins and put the timer on 2, Oh! the Grave mistake I made, but in the half that is when it came in between 0 and 1 I had to switch it of, as the house started getting a burnt smell the Raisins started burning!!, so, I could save some of them and I had to throw some to the bin as they were burnt, then I Garnished Halwa with Raisins and some Almond slices and served it hot. Take an other look at my cute little MW Halwa. 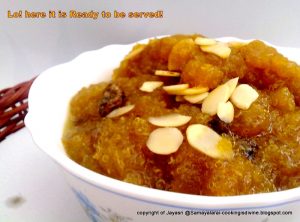 I am sending this to Lubna and Yasmeen’s Ramdan event fasting to feasting, as I feel with quinoa it is a healthy diet too. and to Nivedita’s MW – fruits event which of course was started by Srivalli of cooking for all seasons. Hope all of them like my MW – Halwa…., bye for now and will come back soon… take care..
Previous Post: « Crispy Onion Pakodis
Next Post: Fusilli with Roasted Red Pepper(capsicum) and Tomato sauce »