Hi everybody, Hope you all had a lovely weekend, I had a good one making these gorgeous Nanaimo Bars for the Daring Baker’s Challenge !!, The best of this challenge was I made them very early and ready to post!!, and the Graham wafers which I baked on Friday night was over by Saturday Night!!, so, just think how good this one was !!, If anybody has a sweet tooth they would love just like my family !! well, coming back to the recipe and its origin………..
This is the first Daring Baker’s Challenge of 2010
Nanaimo Bars are a classic Canadian desert created in none other than Nanaimo, the British columbia pronounced as Nah-Nye-Moh (Nanaimo), so says our Host Lauren of Celiac Teen.
The January 2010 Daring Baker’s Challenge was hosted by Lauren of Celiac Teen. Lauren chose Gluten free Graham Wafers and Nanaimo Bars as the challenge for the month. The sources she based her recipe on are 101 cookbooks by Heidi swanson and city of Nanaimo
The Graham Wafer recipe Lauren has adapted it to gluten free, check 101 cookbooks for many more mouthwatering recipes, I love most of her baking and her write up to.
These bars have 3 layers a base containing Graham crackers, cocoa, coconut and nuts, a middle custard layer and a topping chocolate. Here are my Graham crackers and Nanaimo Bars.

My Verdict: Graham Wafers were so easy to bake they just came out within 20-25 minutes and I think I got around 35 to 40 of them, The two things I changed to the original recipe was I did not use egg as mentioned but I used 1 tablespoon of Flax seed and Goji Berries milled (powdered) to substitute the egg with 3 tbsp of warm water, and the other thing I used was a fist ful of Pistachios grounded with the custard powder gave it a nice taste (as I love Pistachios), I did not make thick Bars but slightly thinner in size!!
Last but not least the Graham Wafers were a big hit with my kids I baked them on Friday night and saturday night it was all gone, I had to hide 2 of them for my husband to taste as it was who gave me a great encouragement in making these, as he took me to the Asian shop and reminded me to buy the flours!! and when he tasted them when he was back home on sunday and said they were really nice and asked for more!!, I had to tell him that it was just gone.
Thanks Lauren for this beautiful recipe for the year to start with………….
One last look at my lovely Nanaimo Bars, do try them, and never forget to look into the other Daring Bakers and their lovely creations 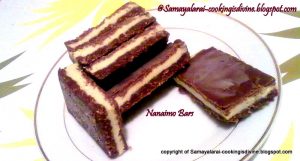