Hi everybody, It’s wonderful to say hello to you all, this post has been pending from 29th of March!, weather has changed drastically and so my days too.., The lovely wonderful summer just disappeared and cold has set in again.., which isn’t very nice at all..,  again with hopes and fingers crossed am waiting for the summer to set in.  will it.. ?.have to wait and see…. 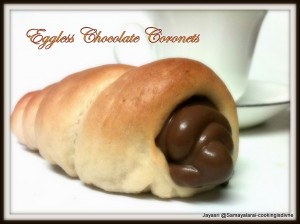 Coming to this recipe.., A few months back I had made something similar but with a savoury recipe.., I will try to post it soon.., and when Gayatri announced Chocolate coronets for Eggless Baking Group, I knew I could do the Bread as I had already made once,  but was wondering about the filling.., but, I made this lovely chocolate custard which was very delicious if only you like dark chocolate..
You must be wondering why am I saying dark chocolate ?, My kids loved the bread and the chocolate custard too.., but to say it in their own words ” Mum, this one is very tasty just like a shop bought one, but it could have been more sweeter you should not have used dark chocolate…, they said it was very chocolate y.. so you can use semi sweet chocolate which might be more delicious for kids.
But they say that Dark chocolates are good for health than the semi sweet chocolates, I really don’t know too much about it.
Anyways.., it was all gone within a day, I had to restrict my kids from eating them as I had not taken photos!!,   lets come back to this recipe…
EGGLESS CHOCOLATE CORONETS
Recipe adapted from : cooking with dog

METHOD:
In a bowl dissolve Instant yeast in  2 tbsp of luke warm water with a tsp of sugar and leave it aside for 5 minutes
Meanwhile In a large bowl take the remaining sugar, flour, milk powder and salt, Mix well combined to this add the dissolved instant yeast and cornflour water roux.
Combine well enough, now start adding water to make it into a dough
Spread the dough a little bit then add the butter until it is well incorporated**.
The dough is super soft now, keep it in a oiled bowl and cover it with a cling film until it is double in size. It might take 1 to 1 and 1/2 hour depending upon the temperature.
You all remember I think 2 weeks back we had a wonderful summer, and to my astonishment the dough rose within an hour. Meanwhile while the dough was rising… 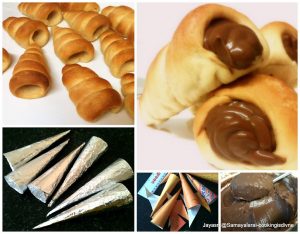 Lets make the Chocolate custard….
In a bowl take cake flour, sugar, cocoa and corn starch and mix well together with the help of a sieve.
Warm the milk about 40 seconds in MW/ luke warm then add all the above ingredients and blend well together without any lumps then strain this mixture into a bowl.
Switch on the stove and start boiling add double cream and continuously keep stirring as it will start to thicken, Once it becomes thick take it off the stove and keep aside.
To this immediately add chopped butter and mix until well incorporated.
Next add grated chocolate and tsp of Glucose combine well until smooth.
Transfer this into a bowl and cover it with a cling film or a sheet,  that is the cover must touch the custard  not the top of the bowl this is prevent the custard forming a skin and set it in a bowl of Ice cubes or refrigerate. until needed.
Meanwhile your bread would have risen.

Let’s make the Coronets now….
To check that the bread has risen, coat  your finger in  flour and poke your finger into the bread dough if the hole you made doesn’t close back then it is well risen and you can go to your next process. otherwise leave it for some more time until well risen.
Preheat the oven to Gas Mark 5/180 degrees just before 1/2 an hour and a bowl of hot water in the base.
On a floured surface put the risen dough and punch it down, (punching means don’t give a hard one, just press it down so the air is released but handle the dough gently).
I weighed the dough it weighed 540 gms and then I divided the dough into 45gms each and made 12 Coronets.
When you are making each one of them cover the rest of the dough in a tea towel.
If you are using coronet moulds grease them with butter, as I did not use moulds and made my own with foil, I did not grease them.
Roll each ball into a long strip, make one side thinner and thicker towards the other end.
Starting from the tapering end, press the thinner portion at that end and start twisting it around the mould and pinch it inside, pressing to close that end.
Leave it on a grease proof paper and cover it again. 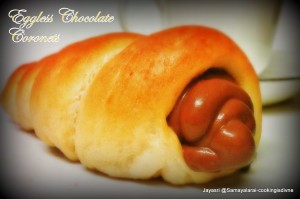 I made 6 at a time, while I was making the first 6, I kept the other half of the dough in a box and kept it in the fridge, as I had made only 6 moulds.
Once all of them are done, cover it and leave it for an other 20 to 30 minutes depending upon the temperature, giving time for the coronets to rise again.
Give a milk wash.
Place the coronets in the middle rack and bake for about 15 to 20 minutes depending upon your oven or until it is Golden in colour.
Remove the Coronets on to the wire rack, give 5 to 10 minutes and gently remove the coronets from the mould until it cools down.
It can be stored in a air tight container until needed.

Let’s Assemble the Coronets now:
Fill the Chocolate custard in a piping bag or a plastic bag,
If using a plastic bag cut of at the corner making a hole.
Squeeze the chocolate custard into the coronets until it is completely full.
Repeat for all the other coronets
Serve it with a warm cup of coffee, milk or tea. 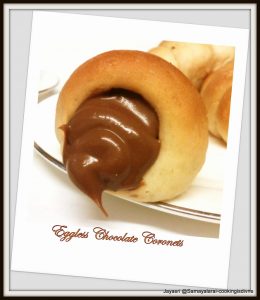 Let’s  make our own mould :
cut the craft sheet and aluminium foil to the measurements as said above, draw a line in the middle of the paper that is a diagonal line, turn the sheet into a cone shape keeping it as the middle point and complete it and  cut of the top into a circle, and staple the meeting point or the overlapping point.
Now take the Aluminium foil, and roll the crafted coronet mould into it completely, and fold in the extra portion at the top end into the inside of the mould and the squeeze the overlapping sheet into the mould.
Now your coronets are ready to rock !!.

My Tips:
**Use a food processor, I do not have a food processor but these days I use my wet grinder which has a atta kneader (for kneading chapati dough), which acts as my food processor, as I suffer from pain in my shoulders, it is very difficult for me to knead dough for bread, so this is my method for kneading the dough. I take it out and knead it a bit more in hand just for my own satisfaction.
I used liquid Glucose, so it wouldn’t become too hard, I used extra corn flour for substituting eggs, the chocolate custard was not too hard or not too soft, it maintained its shape.
I would like to thank Gayatri for being patient with me.., and for this wonderful opportunity to bake these..
This is also yeast spotted….