Today My eldest was browsing through my collection of recipe books and she was so adamant that I should try out something from one of the books, because she always complains that I have these books on dessert and I never try out anything!. So, we both sat and rumbled through this recipe book of James Martin – Desserts and both decided to try out this recipe!, I love this book as it has a fabulous collection of recipes with basic techniques and is well explained. I could say that it is a fool proof recipe book I have 4 to 5 recipes from this book and all of them have turned out so well, I will post each one of them soon! (?)…
Once we decided upon what we are going to make, I told her we will make this into half and I will add egg to the one half and the other half I will try eggless!, she was not quite happy with it, but then she agreed (thank God!, I had my fingers crossed as I wanted her badly at my side, because I needed somebody to wash up all the things used when I am going through with it!, I always do the washing then and their when I start with the process, so both of us in do the chore!).
So, well when everything was set we were ready to go, she made the mixing of the egg based one and I made the eggless one! 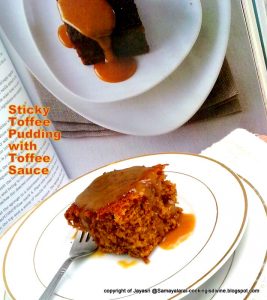 As James Martin tells in this book that
‘ the origin of sticky tofee pudding are mixed. Some people say it comes from the Sharrow Bay Hotel in the Lake District while others claim it comes from the The Udny Arms Hotel in Aberdeenshire., for me, I like to think Francis Coulson or Brian Sack, the original owners of the Sharrow Bay, invented this dish in their fantastic hotel on the banks of Lake Ullswater, All I’ve done over the years is to tweak their recipe. I make it with a really rich toffee sauce- let’s face it, if you’re going to make a pud like this, you’ve got to do it properly!’.
Mmm.., the pud was really grate with that toffee sauce, even my sweet loving daughter thought it was too sweet for her, If you love sweets this toffee pudding with toffee sauce is just right for you!!!!.

I could just have the toffee pud, but the sauce was too much for me, and what a fool proof recipe!, the pud was so soft and was just like a sponge, I couldn’t believe that it turned out so well!. 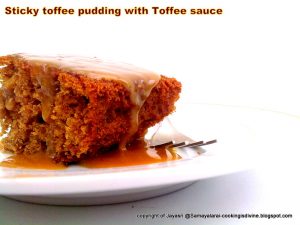 Coming back to the recipe check out the Ingredients:
The coloured ones in brackets is what I used as I had earlier told you that I made half with egg AND  the other half without eggs……, is what I made with this recipe.

75gms of Soft butter (50 gms butter)
175gms Dark brown demerara sugar (100gms sugar)
200 gms Self- raising flour, plus extra fr dusting (100gms flour)
1 tbsp of Golden syrup (as it is I used)
2 tbsp of Black treacle ( as it is I used)
2 eggs (1 Egg)
1 tsp Vanilla extract (as it is I used)
200gms pitted dried dates (as it is I used)
1 tsp Bicarbonate of soda (as it is I used)
Another important thing I changed in this recipe was I used 2 completely riped bananas. So, one banana for each cake!!. got it….
The Print in the black is the Original recipe but as I said earlier the one in the red is the recipe I used, so what did I do then ?
well, as I had planned earlier I will use half of the original ingredients with egg and the other half with eggless, I had to equalize the recipe first as I could not measure in equal quantities the measurment given above so I increased the quantity of butter and sugar but used the other ingredients as it is and used only one egg.

METHOD:
Pre-heat the oven to 200 degreee centigrade/400 d F/Gas mark 6.
Grease a tin (23cm) thoroughly with 25gms of butter, then dust the inside of the tin with flour.
I used a square tin and a cake tin, to make both the cakes.
Using a mixer, blend the remaining butter and sugar together (I used my spatula), Slowly add the golden syrup, treacle, egg and vanilla extract to the butter mixture and continue mixing. Then add the flour, Until all the ingredients are well combined together.
Place the dates in a saucepan with 300ml water and bring to boil. Puree the water and date mixture and add the bicarbonate of soda. While it is still hot, quickly add this mixture to the egg mix. Once the mix is combined pour into the prepared tin and bake for 40-45 minutes until the top is just firm to the touch.
My Verdict: I made the date puree just as said above but it was not hot when I mixed it with the cake mixture. I blended all the wet ingredients first and then I added the flour little by little not mixing too much but well blended with the wet ingredients, then baked as said.
Remove the pudding from the oven and allow to cool, then turn out of the tin and cut into squares.
EGGLESS STICKY TOFFEE PUDDING WITH TOFFEE SAUCE 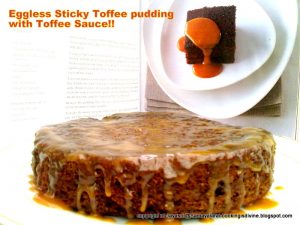 INGREDIENTS FOR THE EGGLESS CAKE:
1 Ripened banana mashed
2 tbsp of Linwood’s Organic milled Flaxseed, sunflower and pumpkin seed powder
3 1/2 tbsp of Canola oil (instead of 50 gms of butter).
First I took all the ingredients as said in the first recipe, expect for butter and eggs, I mixed all the wet ingredients first then pureed the dates made into 2 equal proportions, then to the first portion I added butter and eggs and then the flour.
For the second cake I again took the pureed dates into the mixie then again gave a nice whisk with flax seed powder and canola oil and blended them well in the mixer. To the mashed banana I added all the other ingredients without the butter and egg, combined well and poured into the baking tin and made a round cake.
Hope you understood what I have explained so stupidly, scroll down so you could understand what I was trying to tell you 🙂 🙁 !!! ????, Please contact me if you have any doubts. 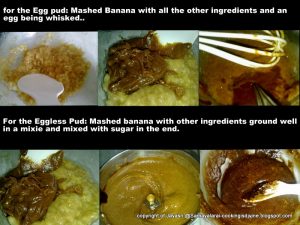 I put both the tins together into the oven both of them almost took the same time to bake, just insert a skewer to check to know when it is done.
TO MAKE THE TOFFEE SAUCE
100 gms soft sugar
100 gms butter
200ml double cream
This was the ingredients given in the book, again I halved the ingredients and made the sauce, it was absolutely delicious, just like the toffee, absolutely yumillacious, too sweet for me!!
METHOD:
To make the sauce, melt the butter and sugar together in a small pan, add the cream and bring to the boil. Simmer for a few minutes until the sauce reaches the desired consistency ( I made it until it was a semi thick batter).
To Serve, you can re-heat the sponge in a microwave or heat for 5 minutes in the oven at 180 degrees /Gas mark 4. Place onto a plate with lots of the sauce on the top and a scoop of vanilla ice cream if you wish.

Jamie even says that the sponge and sauce can be made in advance. The sponge can even be frozen and both can be plated up and re-heated in the microwave.
Make it and tell how it turned out!! enjoy ………. have a good day ahead and lovely weekend.
The flax seed powder is what I use in all the recipes where I have said flax seed powder to make my eggless bakes!!
I like to send this to champa’s bake-of event…. Happy Baking
Previous Post: « Nangainallur Rasam, Potato-Onion Roast and Tomato Pulikaachal
Next Post: Dhaniyaalu podi (coriander powder) Andhra Style »