I had been to my Friend’s place the other day and as we were chatting away, she went get me some Tea and I just couldn’t sit there doing nothing so I got up started browsing through her books in the shelf ( that is what most of us do I think when we love books right ?), and this book caught my attention as first thing it was a cookery book then I found this about South-east Asia, don’t we all want to have a peek if it says so!, So did I , nothing wrong though, it’s natural, is something Indian there !?, what he thinks about south-east Asian food etc.,.. well, I wouldn’t buy it though to be honest, as it had lot of Non-Vegetarian dishes featured, as my friend is one, it might be useful for her. But, But, It had so beautiful photos and so very authentic about spices that is what I noticed when I went through the vegetarian dishes in it.  She said she hadn’t tried anything from it still and she said I could borrow her book, well, that is what I was waiting for, So.., had that wonderful cup of Tea picked the book and went back home, sat again with a cup of Tea and started gazing through the pages, and mentally thinking what vegetables I had in hand I made two recipes out of this book and they really turned out so well, I really liked the book and may be who love to cook Asian recipes I think they can give this a try as it was really nice. You might be getting frustrated by now because I haven’t mentioned the name of this book :), It is Rick Stein’s Far eastern Odyssey

,  when he traveled to South-east Asia, he fell in love with the varied and colourful cuisine of Bangladesh from the hearty lentil Dal’s to Aromatic Vegetarian curries, in his words he says..
”Bangladeshis say that their cuisine is not worth making fuss about, and most of the Indian Restaurants in the UK, which are owned and run by Bangladeshis, tend to feature the cuisine of the rest of India and Pakistan. But I found that people eat a variety of meat and rice dishes with Northern Indian and Persian influences, I suppose if you ask me for three of the most distinctive flavours of Bangladeshi cooking, I’d say Mustard, Ghee (clarified butter) and a particular type of spice mix, Panch Phoran, a combination of Mustard, Nigella, Cumin, Fennel and Fenugreek Seeds”.
So, that’s it, I started into my culinary world with the recipe in hand.., as I knew what I was going to cook…
I have to say I had to tweak this recipe a little bit with some Ingredients.
And also I had to feed 5 hungry people who love chapatis and subzis, Actually this recipe says it serves 6, I wouldn’t think so, as I had to make it more to feed the family of 5  , I think this recipe from the book may serve around 3 people maximum if you like your curries. 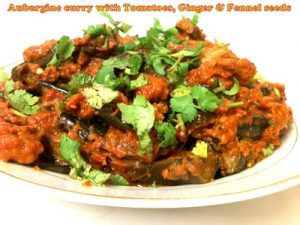 INGREDIENTS:
600 gms Aubergines/ Purple Indian long Variety Brinjals
150 ml vegetable oil ( I used 1/4 cup Sunflower oil)
40 gms fresh root Ginger (I used 1 and 1/2 inch)
40 gms Garlic roughly chopped (I used 5 cloves of garlic)
2 Green Cayenne Chillies finely chopped (I used chillies from my garden I do not what variety it is!)
2 tsp Fennel seeds (I used 1 tbsp and 1 tsp Fennel seeds)
1 tsp Cumin seeds (1 and 1/2 tsp)
1 tbsp freshly Ground coriander seeds
1/2 tsp Turmeric powder
400 gms Chopped Tomatoes or can use from a can ( I used 600 gms)
1/2 tsp freshly ground Black pepper
5 to 6 sprigs of Coriander leaves
3 sprigs of Mint leaves
(He uses both coriander and mint leaves 1 tbsp)
I also used 2 tbsp of Tamarind juice and 1 tsp of Red chilli powder which was not in the recipe

METHOD:
Cut the top of the Aubergines/Brinjals and cut them in half lengthwise, as I had little larger ones I had to again cut each across in half and then again each piece lengthwise into 4 wedges (the recipe says toss them with a tsp of salt and set aside in colander for 10 mins), well I did not do so I just cut them into wedges and tossed them in water as we all know they turn black if you didn’t do so as it reacts with oxygen when exposed, like the Apples.
Then Heat a frying pan with oil, I took out the Brinjals out of the water pat dried it on a kitchen towel they using 1 tbsp of oil I coated them, then used around 2 tbsp of oil and shallow fried few Brinjals at a time in 3 batches on a high heat, until richly browned for 3 to 4 minutes. ( I liked this Idea as he says this way it helps prevent them from absorbing too much oil, which would make the finished dish greasy), I did not use any extra oil  again but used a sprinkled little salt every time I sauteed every batch.

Then I Put the Ginger, Garlic and chilli (as said in the recipe ) but I also added chopped Tomatoes  into the food processor, I mean my Mixie and whizzed it into a smooth paste.
Take a big kadai/wok/frying pan and then add one  tsp of Fennel seeds and cumin seeds and allow them to sizzle for a few minutes, 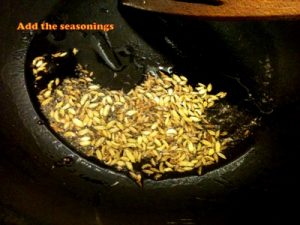 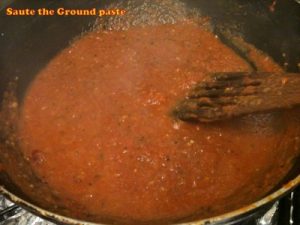 Then add Turmeric powder, chilli powder, coriander powder, Tamarind juice and  Black pepper powder mix well, then leave it again for a few a further 8 to 10 minutes covering with a lid in simmer , so that the raw smell of the tomatoes are gone and they all get cooked well, then you can see that it is kind of reduced and thickened slightly.
Return the Aubergines into the pan and stir well to coat in the sauce, But then the recipe makes into a dry curry but I made into a Gravy by adding 1 and 1/2 cup of water and covered it with a lid and cooked them again with required quantity of salt, remembering that I had already added a little bit of salt every time I fried the Aubergines, It was so like a Restaurant dish, and was really mouthwatering. 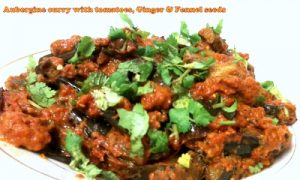 I served them with chapatis, you can serve them with pulkas, Naans etc.., may be it might go well with rice too..
I should say it doesn’t look like anything from the photo of the book, but a lovely recipes with lot of flavours..

I am sending this of to Toviewtoronto’s food palette’s Red event.

and here are few more of my Red coloured dishes, which might go with her events and hope she likes it….., as she said she wouldn’t might the archives, at least I wanted to post something new to her event.